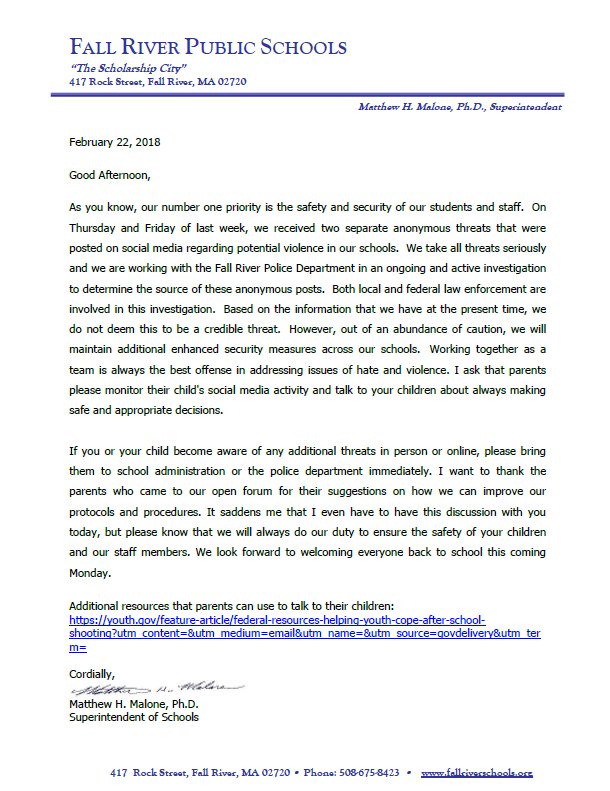 Armed Robbery - Stop & Save Convenience 345 Robeson Street
DATE: Wednesday February 21, 2018 @ Approximately 8:00PM
On Wednesday February 21, 2018 at approximately 8:00PM, The Fall River Police responded to Stop & Save Convenience located at 345 Robeson Street in regard to an Armed Robbery. Upon arrival responding Officer Thomas DeMello spoke with the victim who stated that he was just "pepper" sprayed by a suspect and explained that cigarettes were stolen.
No money was obtained during the commission of the crime.
After interviewing the victim, Officer DeMello identified that the store was equipped with video surveillance. .
The Fall River Police Department is asking for the public's assistance in identifying the suspects pictured in these screen captures.
Suspect #1: black male, 19-21 years of age, 5'7-5'9 thin build, small amount of facial hair on chin, wearing black pants, black jacket, grey Patriots hoodie, red and blue flat brim cap, black Nike Jordan style sneakers with white soles and red laces.
This suspect pepper sprayed the clerk and stole Newport cigarettes.
Suspect#2: black male, thin build 19-21 years of age, 6'- 6'1, black hoodie, grey sweatpantss, black sneakers. This suspect appears to be the lookout.
Anyone with information regarding this incident please contact Detective Larry Ferreira of the FRPD Major Crimes Division at 508-324-2796. Anonymous TIPS are also accepted through our TIP line @ 508-672-TIPS and also Facebook Messenger.
On Thursday, February 15, 2018 at approximately 6pm, we received an email from a student alerting us to an anonymous social media posting regarding a threat of violence at B.M.C. Durfee High School.
We immediately began an investigation, working closely with the Fall River Police Department, to ascertain the validity of the threat and make a determination of threat level assessment.
Based on the facts as we knew them, we determined the threat was not credible; however, out of an abundance of caution, we increased our level of security at B.M.C. Durfee High School today, Friday, February 16, 2018.
As such, we employed the use of metal detectors and bag checks. We also had additional police presence, working in partnership with the Fall River Police Department. Attendance was down today, as to be expected, but school was safe and learning and teaching was happening in our classrooms.
The Fall River Police Department is investigating all leads regarding the origin of the anonymous social media post. The FBI is presently assisting the Fall River Police Department in this effort.
No other information can be released at this time so as not to jeopardize the investigation. We encourage anyone who may have any information regarding the origin of the anonymous social media post to please contact the Fall River Police Department.
Further, we ask that parents help us by monitoring their child’s social media activity as well as ensure that their backpacks and belongings are always safe.
Honest, open communication is always the first line of defense in the prevention of school violence. We will always keep these lines of communication open.
B.M.C. Durfee High School is a safe and secure high school. The school leadership team, the faculty and staff, the school resource officers, the security officers, and our counseling professionals maintain rigorous safety and security protocols and procedures on a daily basis.
Matthew H. Malone, Ph.D., Superintendent

Chancellor Robert E. Johnson to visit Catholic University and the Camões Institute in Lisbon, and bring the university’s Center for Portuguese Studies and Culture under his supervision

As part of the initiative, Chancellor Johnson will move the Center for Portuguese Studies and Culture, the university’s primary conduit to the Portuguese-American community, from the College of Arts and Sciences to the Office of the Chancellor. The governance structure of the Center, with a faculty-led executive board and community-based advisory board, will continue.

Next week, Chancellor Johnson will visit the Catholic University of Portugal as well as the Camões Institute, a Lisbon-based national center that promotes international cooperation and education. The Institute has been a major supporter of UMass Dartmouth’s Portuguese-related education, research, and outreach programs.

“My goal is for our university to fully embrace its historic connection to Portugal, the Azores, and the rest of the Portuguese diaspora in new and innovative ways,’’ Chancellor Johnson said. “To accomplish that goal, we need to coordinate and align the many critical inter-disciplinary initiatives connected to the Center. I believe there is great potential for new innovative partnerships and outreach both close to home and abroad.”

The university is home to the nationally renowned Ferreira Mendes Portuguese-American Archives, Department of Portuguese, Center for Portuguese Studies and Culture, and the Tagus Press, the latter of which publishes Portuguese literary works. The university has also established multiple academic and economic development partnerships, including:

-- The School for Marine Science and Technology has formed a doctoral education partnership with Brazil’s University of São Paulo Institute of Oceanography.

-- The College of Nursing partners with the University of the Azores on the “Bridging the Atlantic” community nursing student exchange program.

-- The Charlton College of Business and Center for Innovation and Entrepreneurship bring students to a “Startup Weekend” entrepreneurship forum at the Nonagon Science and Technology Park in the Azores.

-- The Center for Innovation and Entrepreneurship is advising the Azores business and government community on the development of a technology incubator. 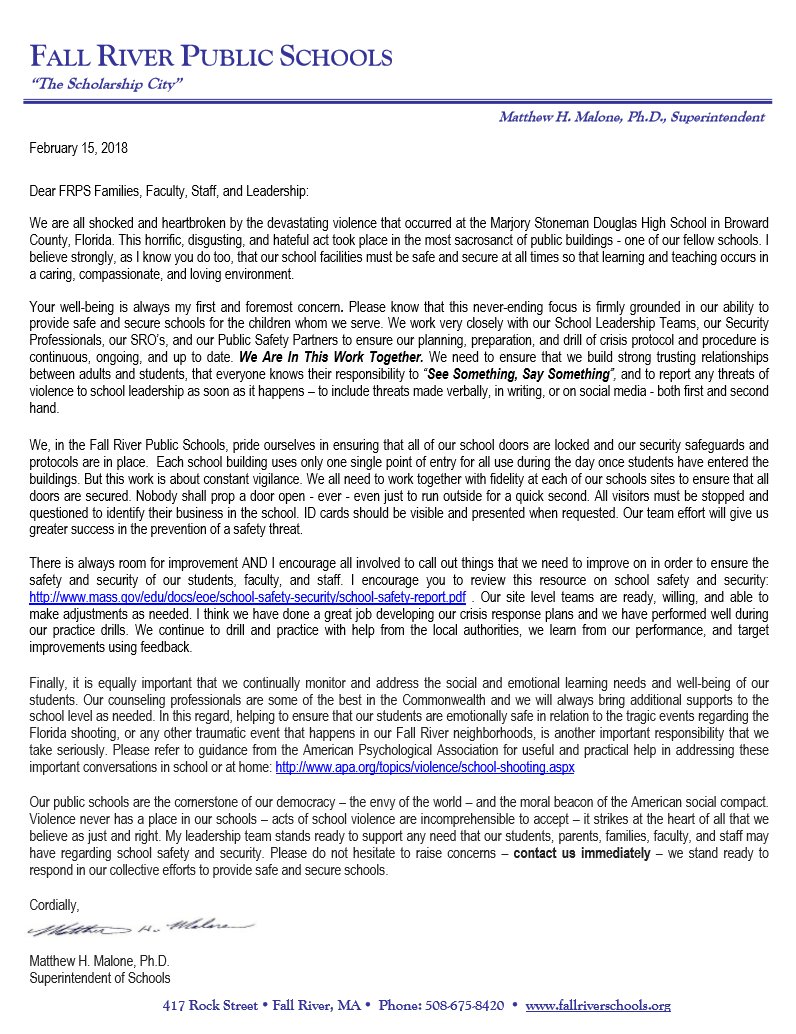 The lone remaining question mark heading into Super Bowl LII has been answered: Rob Gronkowskihas been cleared from concussion protocol and will play against the Philadelphia Eagles on Sunday, NFL Network Insider Ian Rapoport reported.

Gronkowski will meet with the media on Thursday afternoon, a sign that the New England Patriots tight end has cleared the protocol after spending a week and a half under wraps following the AFC Championship Game.

There was little doubt that Gronk was going to miss the Super Bowl. The tight end didn't mince his words Tuesday when he said, "Yes," he expected to play.

Gronk returned to practice on Saturday after suffering a concussion in the title game and was limited on Wednesday.

All the pieces are in place for the Pats, who, with Gronk ready and able, are fully healthy for Super Sunday.

The Massachusetts Department of Transportation (MassDOT) is encouraging safe driving behavior for Super Bowl weekend and helping to spread team spirit in recognition of the New England Patriots participation of the 52nd Super Bowl this Sunday, February 4th, 2018, in Minneapolis, Minnesota.

“We certainly want the home team to do well and share everyone’s excitement about the big game, which is why we are lighting some infrastructure with red and blue,” said MassDOT Highway Administrator Jonathan Gulliver. “In addition, as people make plans to get together or perhaps travel to watch the game, we will use some message boards to remind the public to think about safety.  Let’s all do our part to get ourselves and others home safe, designate a driver who has not been drinking and follow the rules of the road.”

The following MassDOT and MBTA infrastructure will be lit in the team colors of the Patriots:

·         The Burns Bridge in Worcester will be lit in red, white and blue on Friday, Saturday, and Sunday night.

·         The Zakim Bridge in Boston will be lit in red, white, and blue on Friday and Saturday night. (The bridge will be lit orange for World Cancer Day on Sunday as a result of a previous lighting request.)

·         The Government Center MBTA Station and South Station will be lit in red, white and blue on Friday, Saturday, and Sunday night.

There will also be special text on portable message boards controlled by MassDOT which will encourage safe and sober driving during Super Bowl celebrations. The text will read: “Don’t Get Sacked, Drive Sober Sunday,” “Do Your Job, Don’t Drink & Drive,” and “No Days Off, Always Wear Seatbelt.” These messages will appear on select roadway message boards beginning at 7 a.m., Friday, February 2 and through the end of the day on Sunday, February 4.

In addition, the Registry for Motor Vehicles (RMV) reminds the public that it announced last September that a re-designed special New England Patriots license plate was available. The plate is a specialty plate which highlights the team’s five Super Bowl championships with the specific emblem of “5X Champions.” Below the emblem are the numerals of each Super Bowl that the Patriots have won and a star to celebrate each championship. Registry customers can continue to purchase the license plate at state-wide RMV Service Centers or online at http://www.massrmv.com. After paying a registration fee, a license plate holder will then pay a special plate renewal fee of $40 every two years. Proceeds from this plate benefit the New England Patriots Foundation

Massachusetts Governor Charlie Baker has appointed Frank Baptista, founder and host of Radio Voz do Emigrante/WHTB-1400AM, as a member of the Bristol Community College Board of Trustees.

Prior to founding and hosting Radio Voz do Emigrante, Mr. Baptista was the founder and host of Impacto, WJAR-TV 10, a bi-weekly television program serving the Portuguese-speaking community in Southern New England. He previously contributed the column, A Nossa Voz, in the Fall River Herald News, about Portuguese history, national issues, and events, in the United States, and had formerly served as a personnel director at the Shelburne Shirt Company in Fall River.

Baptista serves as a board member of LusoCentro at Bristol Community College, SER Jobs for Progress, and the Massachusetts Health Association Quality Partners. He is a member of the Prince Henry Society of Fall River, Fall River Day of Portugal, Sociadade Cultural Acoreana, Portuguese-American Leadership Council of the United States, and the Advisory Board of Rhode Island Public Radio. He is an advisor to the National Organization of Portuguese-Americans (NAPO).

Baptista has studied at Rhode Island College, Brown University, and the University of Lisbon, Portugal, and speaks Portuguese, English, Creole, and Spanish.

Bristol Community College’s Board of Trustees works tirelessly to ensure the college’s institutional activities remain at the highest level of quality, and BCC’s success is attributed to their dedication and the dedication of our exemplary employees.